Hereditary cystic kidney diseases such as autosomal dominant polycystic kidney disease (ADPKD) or nephronophthisis (NPH) are among the most common causes of end stage renal failure worldwide. These diseases have been linked to mutations in genes encoding for proteins that localize to a specialized compartment of tubular renal epithelial cells, the primary cilium. Primary cilia are sensory organelles that project from the surface of almost all cells of the body and consist of a ciliary axoneme and the basal body/centriole which anchors the cilium in the cell body.

Cilia seem to act as little antennae sensing the cell’s environment. Indeed, cilia have been shown to act as antennae that receive signals from the periphery; the remote information is then converted into signaling cascades that are initiated within the ciliary compartment and transduced to the cell body. 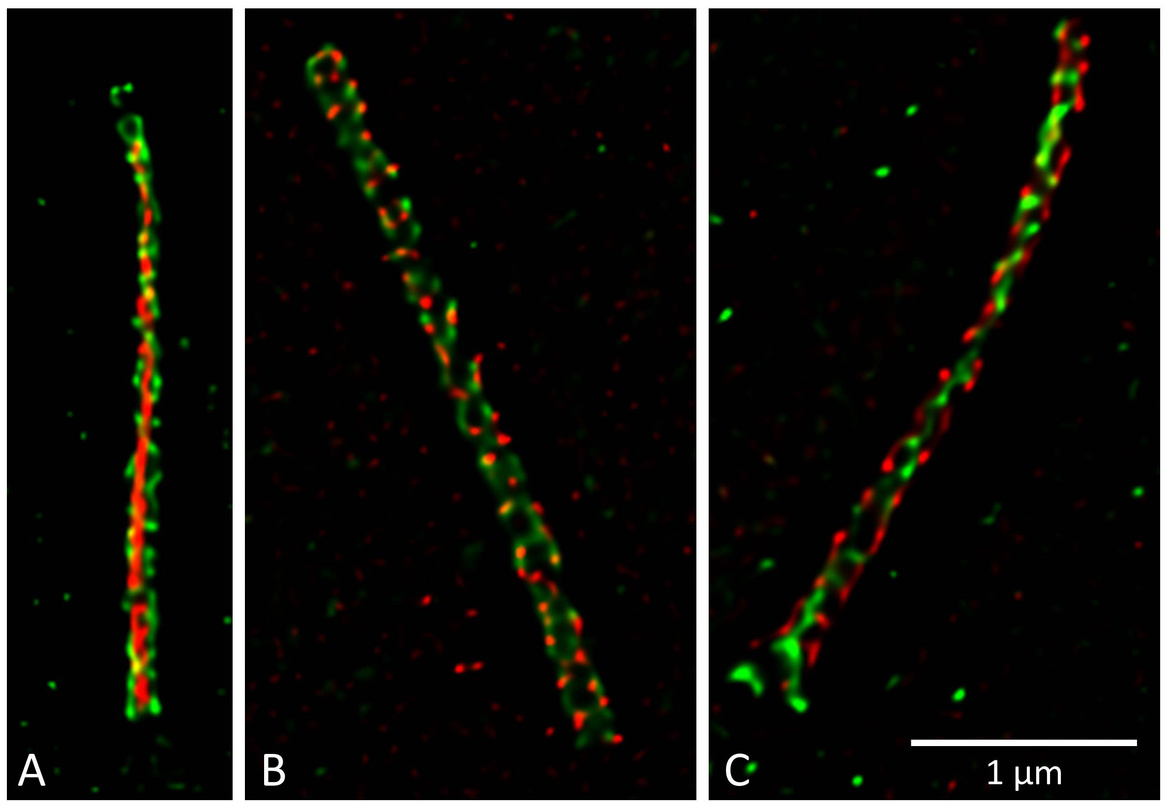 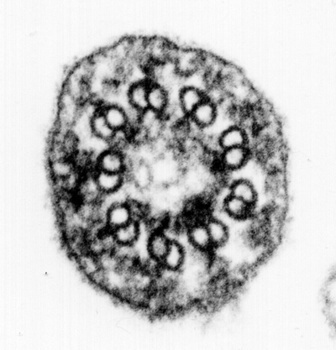 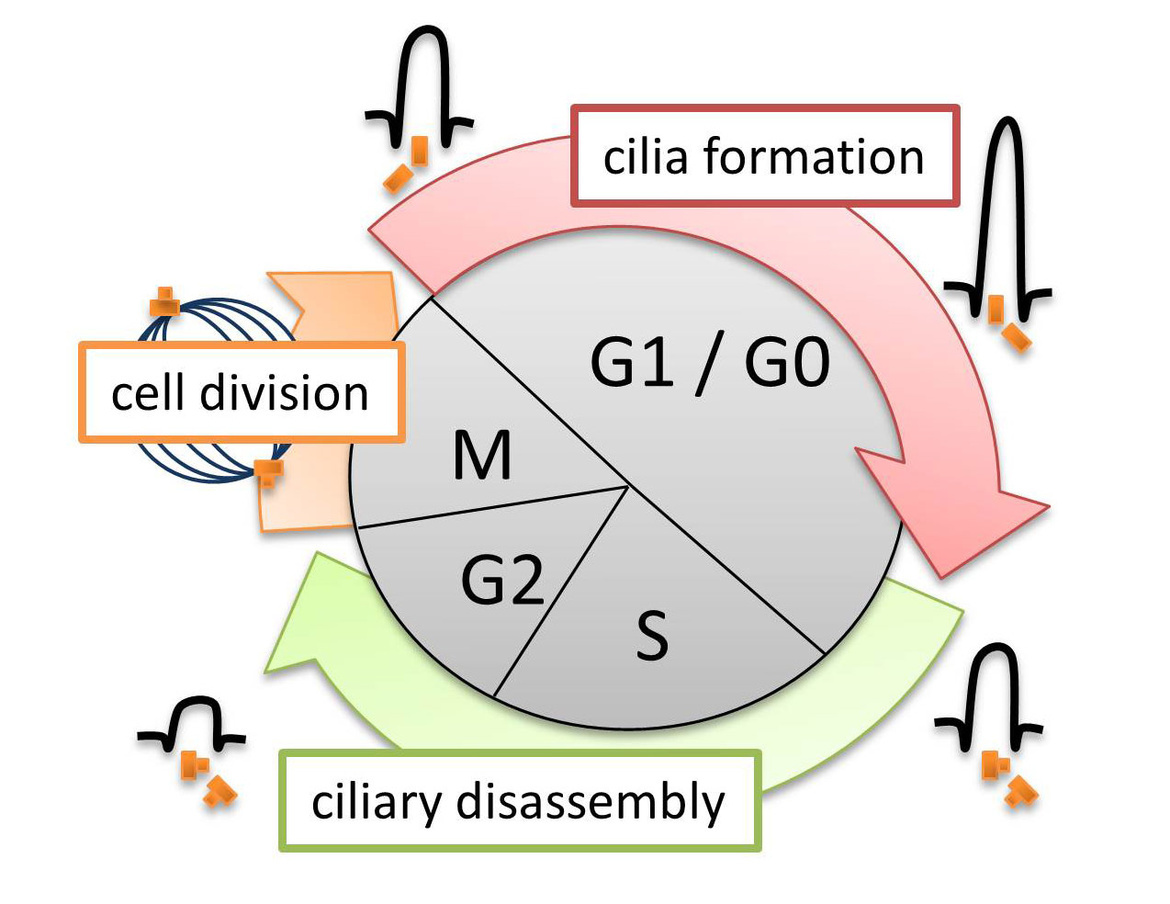 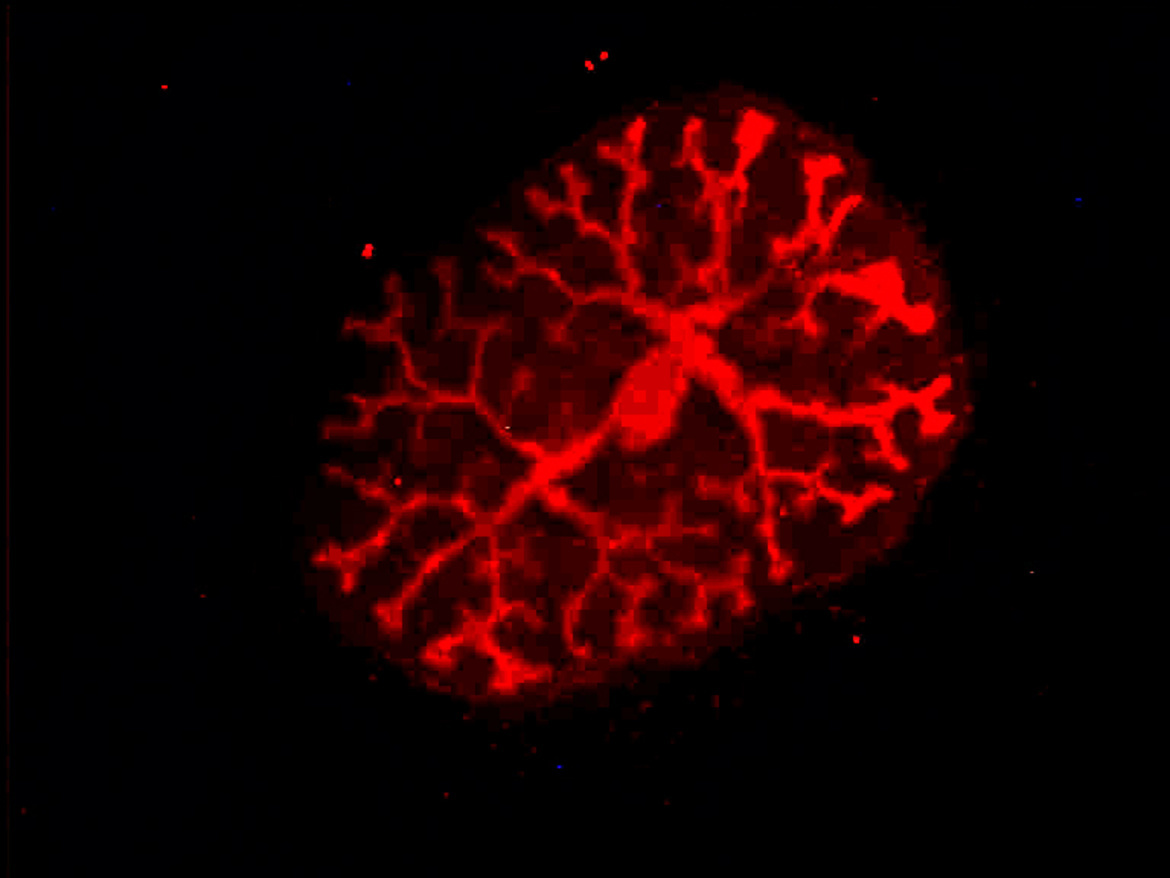 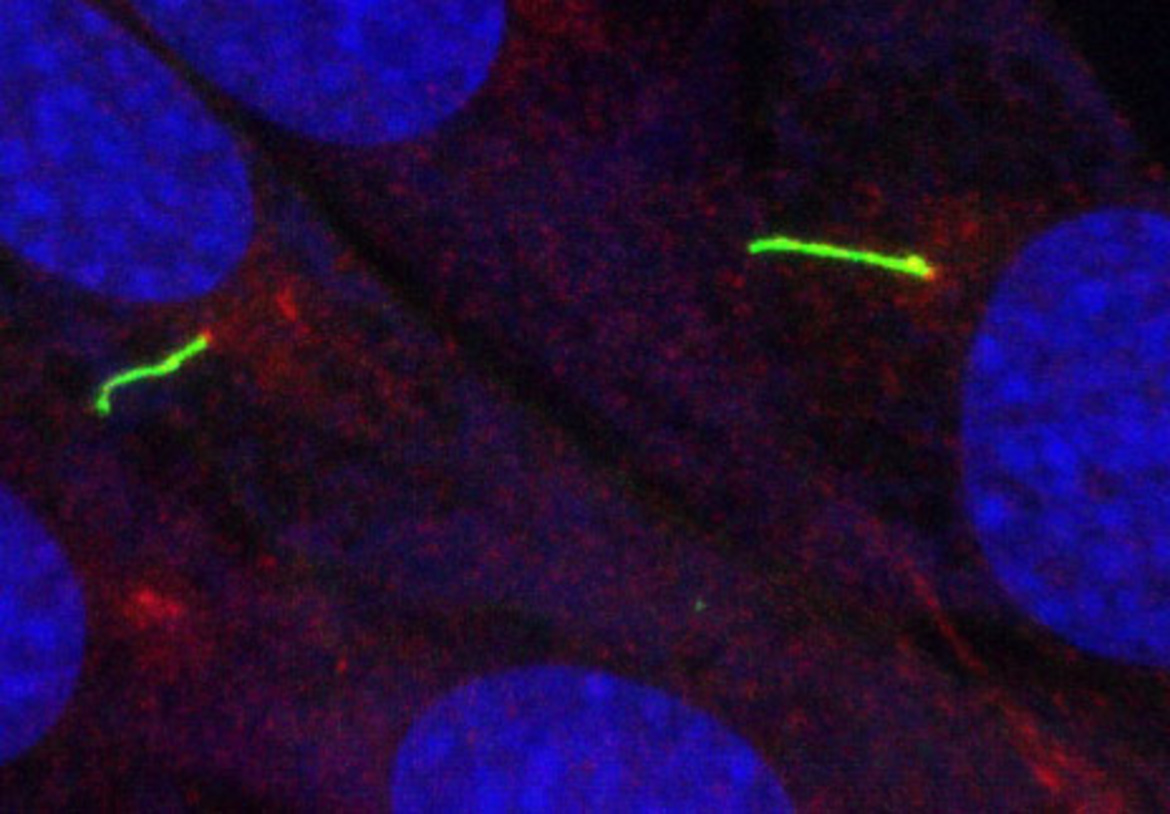 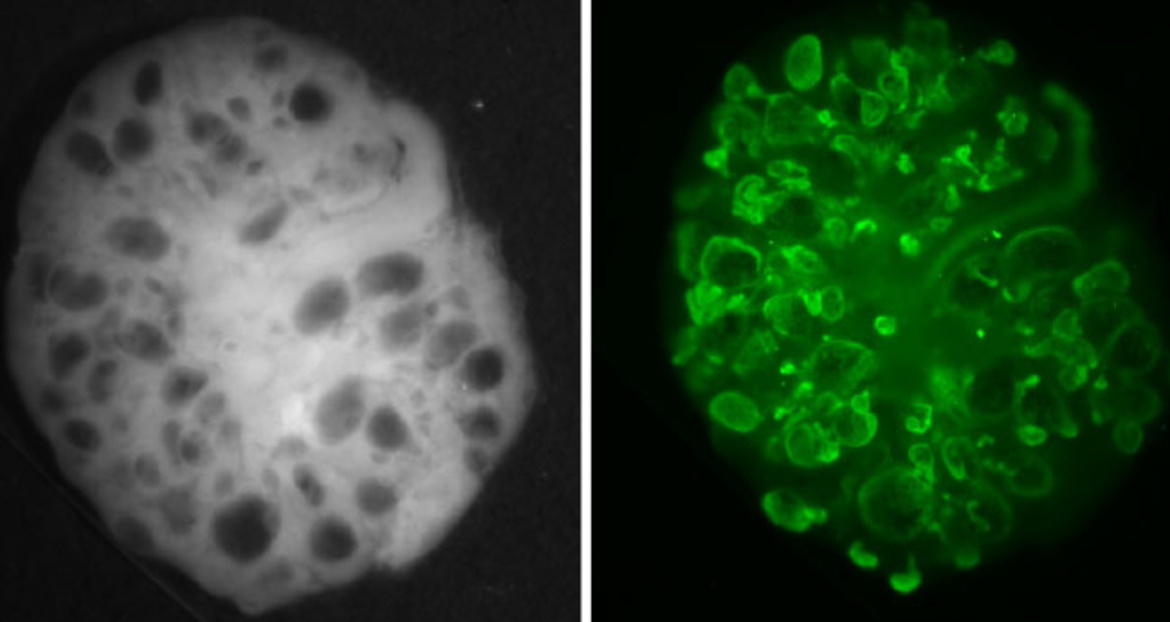 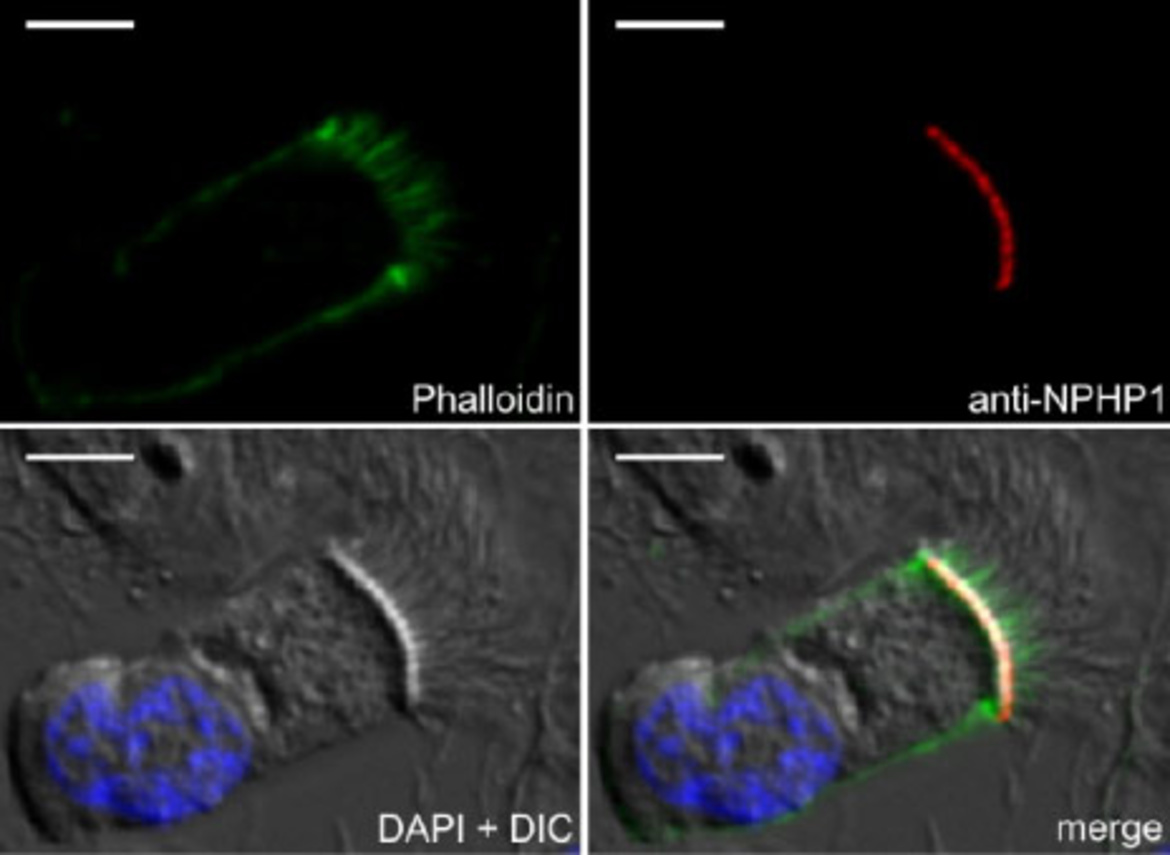 A primary cilium is anchored to the cell by the basal body, which develops from the mother centriole of the centrosome in a manner that is coordinately regulated with the cell cycle. Cilia are mainly formed by quiescent cells in interphase and are thus temporally associated with the development of cell polarity and differentiation. Cilia typically disassemble when the cell re-enters the cell cycle prior to mitosis.

Members of our team are working on various aspects of ciliary function, focussing on genetic cystic kidney disease (ADPKD, NPH). Our group was the first to show that proteins involved in the development of nephronophthisis (NPH) are located in monocilia of kidney cells. We could further demonstrate that these NPH proteins form multiprotein complexes that are involved in signaling from cilia to the interior of the cell. Moreover, we studied how NPH proteins modulate both Wnt and Hippo signaling.

Ongoing projects of our team focus on the function of cilia-associated protein complexes in great detail. We are working on the identification of novel members of the protein complexes using proteomics technologies, and address the in vivo relevance and function of protein interactions using the mouse and C. elegans as model systems combined with various genome engineering approaches based on CRISPR/Cas9. We aim to understand the signaling networks involved in the pathogenesis of cilia-associated diseases. Moreover, we are working on the role of cilia and ciliary proteins as regulators of cell cycle progression and on their impact on tumor development. 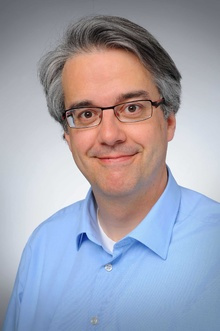